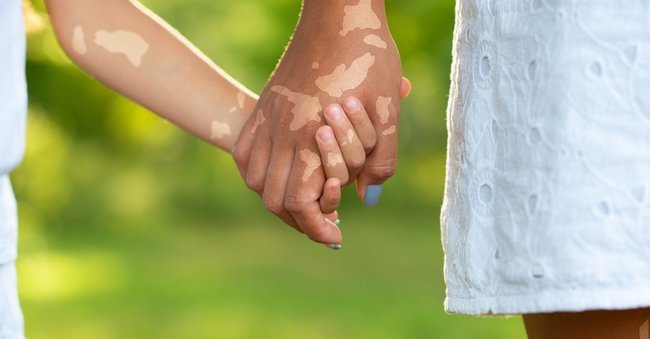 The precise cause of vitiligo is unknown, although substantial research now suggests it is an autoimmune condition in many cases. This means loss of skin pigmentation can result from a person’s immune system attacking melanocytes, the cells responsible for creating skin color.

Those who have vitiligo may still wonder if it is hereditary or triggered by environmental factors. Evidence suggests it may have a genetic component. Approximately 25 percent to 50 percent of those with vitiligo also have a relative with vitiligo, while 6 percent may have a sibling who has it as well.

“I’ve had vitiligo since I was 7 years old,” said another MyVitiligoTeam member. “My grandmother had it, and my aunt had it.”

To learn more about vitiligo and heredity, MyVitiligoTeam talked with Dr. Pearl E. Grimes, director of the Grimes Center for Medical and Aesthetic Dermatology and director of the Vitiligo and Pigmentation Institute of Southern California. Dr. Grimes addressed some questions commonly asked by people with vitiligo.

Am I Genetically Predisposed To Develop Vitiligo?

“We've been looking at this phenomenon of hereditary aspects of vitiligo for many years,” Dr. Grimes said. “In general, I think we can make the statement that roughly 30 to 35 percent of patients with vitiligo will have a positive family history.”

Dr. Grimes explained that this figure generally refers to first- or second-degree relatives.

“We think that the genes that are involved are primarily what we call ‘immune susceptibility genes,’” she said.

Are My Children at Increased Risk?

Dr. Grimes said people who have vitiligo are often concerned they may pass it along to their children. “If we go in the literature, there's probably roughly a 5 to 6 percent risk that your child will have vitiligo,” she said. “My patients ask me this question all the time. ‘Dr. Grimes, is my child going to get vitiligo? Should I worry?’ And my response is, ‘Genetics is genetics.’ You're going to make yourself miserable every day, and you're going to make your child miserable every day, worrying whether or not they're going to get vitiligo.”

As an autoimmune disorder, preventing vitiligo in advance is not yet an option. However, there are vitiligo treatment options that can mitigate its effects and manage its symptoms.

One of the most commonly cited triggers for vitiligo is sunburn. Parents can help prevent sunburn by limiting sun exposure, applying sunscreen to their children, and dressing children in hats and sun-protective clothing. However, Dr. Grimes urged parents of children with vitiligo not to go overboard in protecting them from sun exposure.

“You must allow your child to live life, and enjoy life, and have fun,” she said. “I think that if you restrict them, or you're restricting their activities … it could be much more damaging and devastating for that child, long term.”

Another common trigger for vitiligo is emotional stress. Dr. Grimes said that, while stress is invisible, there's no question it can harm immune responses. Therefore, she advised people with vitiligo and parents of children with vitiligo to take stress seriously and attempt to reduce or eliminate it, when possible.

“It's on my intake form,” she said. “We know that acute and chronic stress can induce immune changes. When you tease out these immune changes, they're some of the same factors and immunologic alterations that can be a trigger for vitiligo.”

Dr. Grimes said that, for parents of children with vitiligo, managing their stress takes consistent involvement and should be seen as an investment in their long-term health.

“I think that parents have to work with their kids, and you have to be vigilant in just looking at … quality of life issues,” she said. “If you find that there is ongoing stress … I think it's very important at that juncture to work with a counselor.”

In addition to sunburns and stress, two environmental triggers for vitiligo Dr. Grimes sees in her practice are bacterial and viral infections.

“I've had kids who have recurrent ear infections that were treated with antibiotics, or they had a bad viral infection,” she said. “These can be standard, flu-like illnesses. … In general, we get that history more often as a trigger.”

Living with a condition that may or may not be hereditary may be stressful for people with vitiligo, and for parents whose children have it. It may be tempting for parents to become overprotective in an effort to spare their children any further disease progression. While this is understandable, Dr. Grimes said it is also essential to make sure the child is happy and fulfilled.

“Make sure your child is enjoying life, and they're having a good time,” she said. “I think these are the basic issues, and life must go forward with joy.”

You Are Not Alone With Vitiligo

By joining MyVitiligoTeam, the social network and online community for those living with vitiligo, you gain a support group of over 4,000 people who understand loss of skin color.

Here are some conversations on MyVitiligoTeam about families and vitiligo:

How does depigmentation affect your daily life? Do you have family members with vitiligo? Share your tips and experiences in a comment below or on MyVitiligoTeam.

I need to talk about my vitiligo

You're invited to a MyVitiligoTeam online Zoom social on Thursday, March 11. Take this...

You're invited to a MyVitiligoTeam online Zoom social on Thursday, March 11. Take this...
read article >

Feeling Isolated and Vitiligo: Impacts, Causes, and How To Cope

Feeling Isolated and Vitiligo: Impacts, Causes, and How To Cope

Treating Vitiligo in Children: Your Guide

Treating Vitiligo in Children: Your Guide

Vitiligo and the COVID-19 Vaccine: What We Know

Vitiligo and the COVID-19 Vaccine: What We Know

During the COVID-19 pandemic, MyVitiligoTeam will provide summaries and links to articles of...

During the COVID-19 pandemic, MyVitiligoTeam will provide summaries and links to articles of...
read article >

How To Have a Safe Holiday With Vitiligo During COVID-19

Article written by Alison Channon The 2020 fall and winter holiday season will be different than...

How To Have a Safe Holiday With Vitiligo During COVID-19

Article written by Alison Channon The 2020 fall and winter holiday season will be different than...
read article >

Some of the world’s most knowledgeable vitiligo doctors and researchers gathered live on...

Some of the world’s most knowledgeable vitiligo doctors and researchers gathered live on...
read article >

close
Overview Symptoms Treatments Types Causes Related Conditions Diagnosis
New to MyVitiligoTeam? Learn More
Quick Links
Q+A Treatments A-Z Resources Are you a provider? Crisis
About Us
What is MyVitiligoTeam? Partner with us Terms of service Press/News Privacy policy Cookie policy
Help With This Site
Getting started FAQ Community guidelines Contact us
© 2021 MyHealthTeams. All rights reserved.
MyVitiligoTeam is not a medical referral site and does not recommend or endorse any particular Provider or medical treatment.
No information on MyVitiligoTeam should be construed as medical and/or health advice.